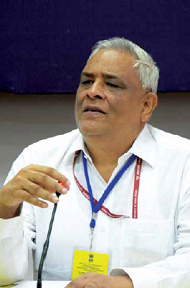 A Disability Rights Activist of caliber that he happens to be, Shri Pincha is blind since his birth. Shri Pincha is a former Founder Principal of the Government Institute for the Blind in Jorhat, Assamwhere he had rendered honaray services for sometime before the said Institution was taken over by the Govt., Former Joint Director of Social Welfare of Government of Assam, Former Regional – Senior Manager of ActionAid (an international NGO) of the North-East of India and a Former Senior Manager-cum-National Theme Leader looking after ActionAid’s work on the United Nations Convention of the Rights of Persons with Disabilities. He was also associated with the National Human Rights Commission as its Special Rapporteur (Persons with Disabilities) prior to assumption of charge by him as the Chief Commissioner for Persons with Disabilities. Currently also, he is associated with the National Human Rights Commission as its Special Rapporteur for Persons with Disabilities. He also headed another statutory body, namely, the National Trust for the Welfare of Persons with Autism, Cerebral Palsy, Mental Retardation, and multiple disabilities as its Chairperson. Thus, he is so far the only person with disability in the country to have headed two statutory bodies.

A Law Graduate and a Masters Degree holder in English, Shri Pincha is particularly known for his legal and judicial advocacy. He is also the recipient of a National Award of Best Employee (Visually Disabled) in the year 1999 instituted by the Ministry of Social Justice and Empowerment, Govt. of India and given away by erstwhile President of India.