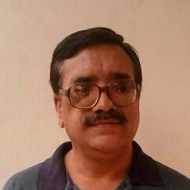 Rajive Raturi has a Masters in Business Administration and worked in the Corporate sector in India and Africa for 17 years in senior Managerial assignments. Rajive moved to the social sector after suffering an accident which left him with a visual disability. He now has over 15 years of work experience in the Social sector with Disability Rights as his core area of work.

During this period, as Sr Director in Human Rights Law Network, Rajive has networked with persons with disabilities and DPOs at a national level,worked towards capacity building of DPOs, provided legal services through a network of socially minded lawyers, supported persons with disabilities in filing individual litigations with Commissioner Disabilities, Administrative tribunals and the High courts, supported DPOs in challengeing systemic violations by filing PILs in High Courts and the Supreme Court , led national level campaigns on law reform and the right to vote .

Rajive has co edited a compendium titled Disability and the Law and scripted an educational documentary film on rights of persons with disabilities and developed ‘Know your Rights’ information for awareness generation . In 2009, he was nominated as member of the expert committee set up to draft the new disability law by Government of India.

Rajive was Asia Pacific Head of Disability Rights Promotion International between 2014 and 2016 and has also worked towards building capacity of Disabled Persons Organisations in South East Asian countries to monitor their rights and has advocated with International human rights monitoring bodies to implement the CRPD.

He has represented the rights of persons with disabilities in several National and International conferences and has participated in Civil Society meetings in the United nations. He has also written papers and monitored and evaluated disability projects for International Developmental organizations.

In 2016 he received the ‘ Limca Book of records Person of the year’ award from Mr Narayana Murthy, Founder Infosys in recognition of demonstrating extraordinary courage in overcoming challenges.
He presently heads Law and Policy at NCPEDP in New Delhi.