Home › About Us › Composition of Commission › Bio Data of Dr. Dnyaneshwar Manohar Mulay 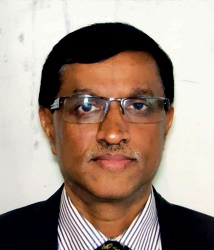 Dr. Mulay served as a Diplomat in the Indian Foreign Service (1983 – 2019). He is a renowned Author, Motivator and former Secretary to the Government of India

Joined as Member, National Human Rights Commission, India on 25.04.2019.
Secretary (CPV & OIA), Ministry of External Affairs, New Delhi [Feb. 2016 till January, 2019].
Under his leadership, 410 new Passport offices were opened in the country as a part of taking passport office to every Lok Sabha constituency. From a mere 77 passport centres in the country the number in 2019 stands at 510.
Created a strong framework to help Indians stranded in overseas countries. Framework created would ensure no Indian suffers in distress in any overseas location.

Indian career diplomat as well as a celebrated author and columnist.
From the 1983 batch of Indian Foreign Service and served in several capacities, including the Consul General of India, New York and High Commissioner of India, Male.
Successful writer and written over 15 books which have been translated in Arabic, Dhivehi, Urdu, Kannada and Hindi.
His magnum-opus – Maati Pankh ani Akash, written in Marathi, has received immense popularity and has also been prescribed in the Arts curriculum at the North Maharashtra University, Jalgaon (Maharashtra).
Inspired several socio-educational projects including Balodyan, an orphanage in his native village.
A documentary titled ‘Gypsy’, highlighting the life and work of Dnyaneshwar Mulay, was produced by Director Dhananjay Bhawalekar. The film received ‘Special Jury Award’ at the Delhi Short Film Documentary Festival.
Well-known writer Deepa Deshmukh authored a book titled ‘Dr. Dnyaneshwar Mulay – Passport Man of India’.
The D.Y. Patil University of Mumbai honoured with Doctor of Literature (D.Litt.) (honoris causa) for ‘exemplary contribution to society’ in January 2017.

Notable achievements at the Consulate include initiatives of outreach to the Indian diaspora as well as the mainstream American society. Was the main coordinator of the Madison Square Garden event of Prime Minister Narendra Modi in September, 2014.
Launched the “Consulate At Your Doorstep” a unique outreach programme with the aim of deepening understanding with the US decision-makers on India-US relations and addressing the concerns of the community on passports, visas and other matters.
Introduced a monthly lecture series called ‘Media India 2014’, which gained immense popularity, while also helping create new conversations on India. Similarly, introduced lecture series focusing on the Indian States and named India-State by State’.
As the Consul General, also appeared on Comedy Central’s “The Daily Show with John Stewart”, in an episode based on India’s elections in 2014.
In response to the Swachh Bharat Abhiyan announced by Prime Minister Narendra Modi, initiated a Swachh Consulate Campaign in New York. This holistic cleansing campaign set a model of Swachh Consulate campaign for other Indian missions abroad.

Steered the Indo-Maldivian relations to a new level and successfully led the Embassy through the difficult transfer of power in February, 2012.
Instrumental in strengthening the military relationship between India and the Maldives, notably achieving the India-Maldives-Sri Lanka cooperation in the maritime arena.
Handled the difficult situation during the two-week-long refuge of President Mohammed Nasheed in the Indian High Commission in Male in February, 2013.
Established the Indian Cultural Centre in Maldives.

Joined Office as the Deputy Collector of Pune. Later, joined the Indian Foreign Service in 1983.
First served in Tokyo as the Third Secretary and later as the Second Secretary of the Indian Embassy in Japan.
During stint as Second Secretary in Japan, looked after economic relations and paved the way for many Japanese investments in India including from Toyota Motors, NTT-Itochu, Honda Motors and YKK.
Successfully managed the ambitious Cultural extravaganza, Festival of India, which was organized in over 20 cities of Japan over a period of one year in 1988.
Founded the Indian Business Association in Moscow, Russia and was its Founder President for two years. The Association celebrated 25th Anniversary in 2017.
Served in various capacities in Russia, Mauritius and then in Syria as Minister in the Indian embassy.
Instrumental in handling the business relations between India and Russia particularly the transition from the state controlled (Rupee–Rouble) trade to direct trade.
In Syria, facilitated the Sahitya Academy’s first MoU outside India with the Arab Writers Association.
In Mauritius, streamlined and expedited the Cyber Tower project and Rajiv Gandhi Science Centre with Indian assistance.

Born in 1958 in Village Arag in Sangli District of Maharashtra.
Father Manohar Krishna Mulay was a farmer while Mother Akkatai Mulay has been a homemaker.
At the age of 10, left the village to join Rajarshi Shahu Chatrapati Vidyaniketan, Kolhapur, a school that was founded by the Zilla Parishad to nurture talent from rural areas. Became the first student from rural area to win the Jagannath Shankarsheth Award by securing highest marks in Sanskrit at SSC exam in 1975.
Obtained B.A. (English Literature) degree from the Shahaji Chattrapati College, Kolhapur and stood first in the University for which also won the prestigious Dhananjay Keer Award.
Seeking to join the civil services and realizing that there was a dearth of study resources and guidance in Kolhapur, he relocated to Mumbai. In Mumbai, he joined the State Institute for Administrative Career, which provided him the basic facilities for his studies.
Studied Personnel Management at the Mumbai University and won the Peter Alvarez medal for standing first in the University. Subsequently stood first in the Maharashtra Public Service Commission (MPSC) examination in the year 1981 and succeeded in the Union Public Service Commission (UPSC) examination before being selected in the Indian Foreign Service in 1993.